Gaele Sobott is a writer and producer living in Sydney, Australia. The selection of poems below is part of a collection Gaele is developing under the working title ‘Earthly’. 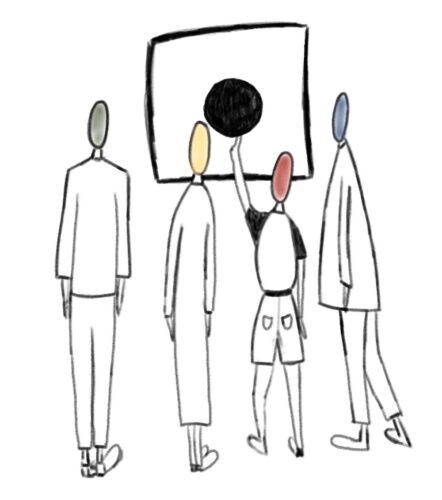 I was Born (Misfit) Still

I allow unarticulated feelings, thoughts and knowing to direct the course of my poems. Floating, allowing the parts of my brain that daydream, intuit, engage in parallel-interactive logic to take over. Maybe, in the end, poetry is a process of interpreting the knowing that exists within bodily experiences, around the body and between one body and other bodies. Surprises and dilemmas emerge along the way and when I work out which direction to take, I spend time crafting a poem.

Some describe elements of my writing as magical. I see these elements as reflections of cultural realities; myth, turns of phrase, musicality of spoken language, the way imagination can be part of the everyday and accepted by a community as such.

I believe my writing is informed by a combination of the joy of imagining, anger, grief, love and disdain. Growing up working class, losing memory, I demand the right to get grammar and other bits and pieces technically wrong, but seek to be subjectively and poetically authentic.

I was BORN (Misfit)

A door creaked open from a watery room.
I flowed, floated, this me that was born,
my chromosomes containing thousands of genes,
some with alleles, mutations
normal to our species,
although many pretend that is not the case.
Curled wet against naked breasts,
held by a hand that smelled wispy
as woodfire smoke and nervous love,
my lips brushed hungry over skin,
my eyes unaccustomed to the light.

One blue-eye allele from father,
one golden-eye allele from mother.
Just one copy of the gene was all that was needed
to form my golden eyes
like witches’ familiars,
like an owl or a Burmese cat.
I don’t mind because
golden eyes see through darkness and sense fear.
Heady, pungent and strangely sweet
like a carpet of mouldering apples
piling brown under an apple tree, fear
shines mauve in a human belly or a dog’s chest.
Some beings hold their fear in odd places
like elbow, antenna, tip of fin.
Fear of the unknown is royal reddish purple.
Fear based on pure hate is dark, dark purple,
almost a lack-lustre black.

My misfit phenotype attracts dark-purple fear based on hate.
Not my golden eyes but a mutation on chromosome 4q35.
Autosomal dominant, fifty-fifty chance,
one copy of the gene was all that was needed.
Father’s allele, with only 8 D4Z4 repeats,
dominated mother’s non-misfit allele.
I am a misfit with muscular weakness,
dystrophy of the facial muscles,
the shoulder and hip girdles,
the distal lower extremity muscles, and
I have wings, the same texture,
the same dark grey as my skin.
They unfurl like the wings of a bat
though I don’t have muscle to fly.
I glide the ridge lifts of the eastern forest slopes
or over the flat lands where cumulus clouds loom large
and thermals circle upwards.

There is danger in the open.
It’s difficult to disappear unless the grass grows long.
Then I lay low, curl my body up tight.
I am safer camouflaged within the forest, the city too,
wrapped in my wings among the granite and concrete shadows
of buildings, I am almost invisible.
In the city I stretch my wings slightly to catch a breeze,
and use wheels to roll along the pavement.
My wings are soft and flexible, control my speed, steer,
keep me warm and dry or cool.
They caress and care for my golden-eyed child
who does not have wings. Neither does her father.
Fifty-fifty chance maybe our future children will glide.
Then, like me, they will learn to conceal themselves
from those whose bellies are distended
with the stench of dark purple fear.

Like me, they will learn,
when necessary, to prepare to fight,
to release the claw
at the tip of their left wing
to its sharpest
length. 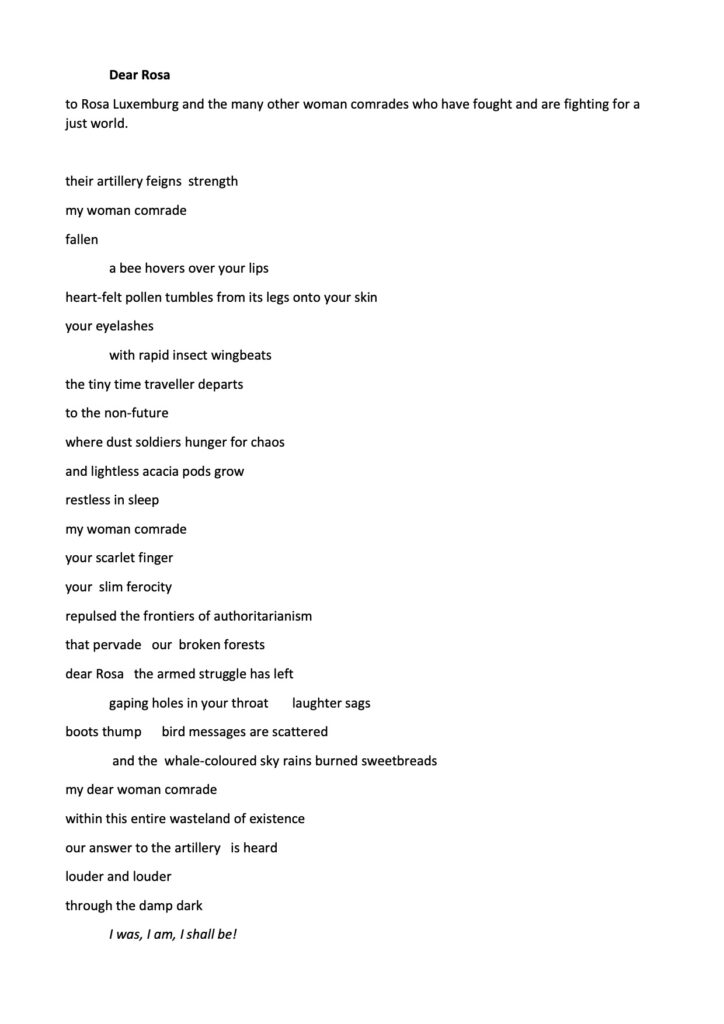 Note: reference is made to ‘the entire hopeless wasteland of existence is heard in this damp dark night’ from The Letters of Rosa Luxemburg, London:Verso, p.455. ‘I was, I am, I shall be!’ are the final words in the last known piece of writing by Rosa Luxemburg, ‘Order Prevails in Berlin’, first published in Rote Fahne, 14 January 1919. 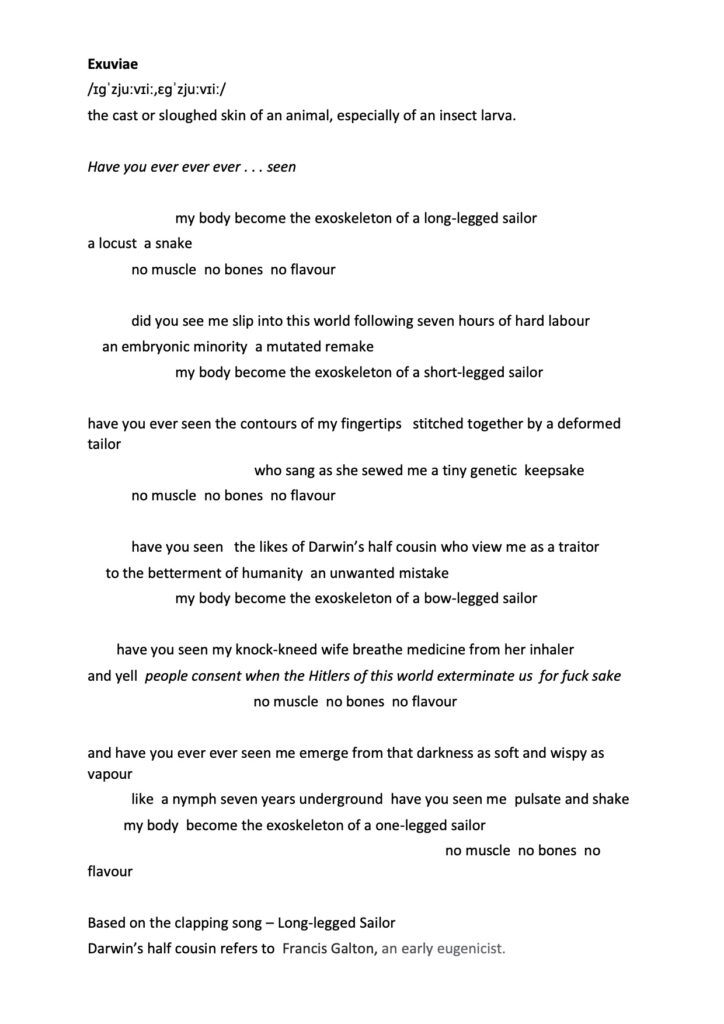 Evacuate is read by Kate Hood. Photo by Breanna Jaber 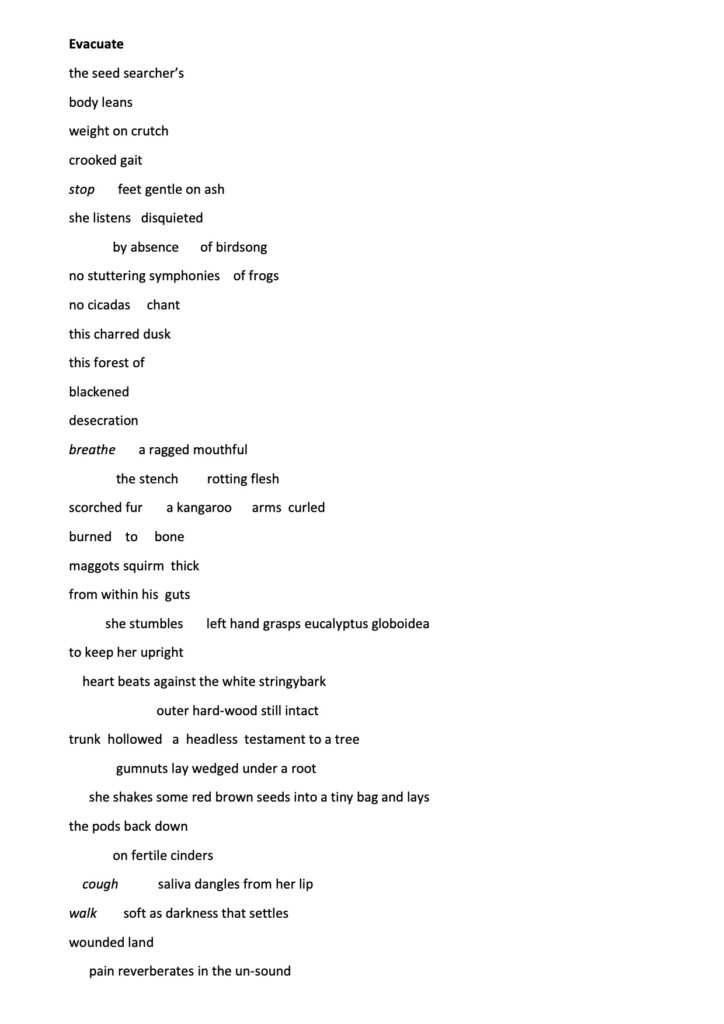 Gaele is the founding director of Outlandish Arts; a disabled-led, not-for-profit arts organisation.