As part of her guest editorship on Disability Arts Online, Lisette Auton talked to gobscure – a prolific, internationally exhibited artist, writer and performer. gobscure says about themselves: “tho sometimes reduced to silences, we mostly play with words, sometimes conventionally / sometimes un.”

I’m given this warning from gobscure in my attempt to showcase their incredible body of diverse work: “good luck with making gobscure whole in a paragraph tho! we’ll see yu at 11 to watch the contortions (we’ll help)”. “we are born with a voice. we get silenced, choked, ignored. before owning our labour we owned our voice. it’s about saying things and asking questions. it’s about ‘oppositional defiance disorder’ being a disorder. it’s labels. it’s about reclaiming.

voice can be performance and sound. voice isn’t just sounds. it’s performance. adding your voice into the mix. we’ve lived. adding it in to the mix. if you want to say it to yourself, or your friends or chalk it up on a wall for thousands of people to read. just have a say. though sometimes reduced to silences, we try and mostly use words in a variety of ways sometimes conventionally, and sometimes un.

there’s so much more – sound, films, poetry, novellas – plus theatre – so we thought we’d mention just a couple of recent things that are available & doable – plus that crumb from something bigger.

still alone in her voices spirals out of psychosis. we’ve spent a while reclaiming the languages of lunacy. labels are strange but we love saying psychosis and watching faces of folks from nice backgrounds going, ‘oh your not psycho’ and they keep digging themselves in… It opens a conversation and keeps them on the backfoot. we did tell others in the north-east mad studies collective a while back we were reclaiming psycho and the reply was ‘about bloody time someone did’.

this is a touring exhibition – large wooden panels overwritten in charcoal, then have fragile fragments of poem erased from their surface. the poem remains the same but they have to be made anew for each venue as viewers/readers keep erasing us – which says it all.

the exhibition premiered thanks to mental health collective newcastle. versions since have toured to arc stockton, isps liverpool, and university of atypical belfast. a print version was part of our solo show is that a bruise or a tattoo? at alma zevi venice (2018 c.e.).

we’re looking for places where it can tour – perhaps with other accompanying work, performance, participation … its also published in anarkissed – charcoal text-visuals that have been exhibited.” 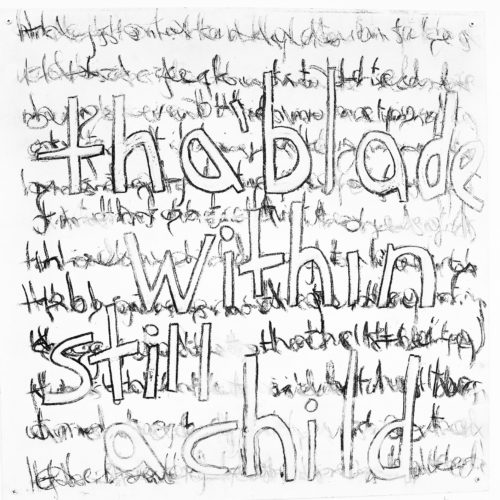 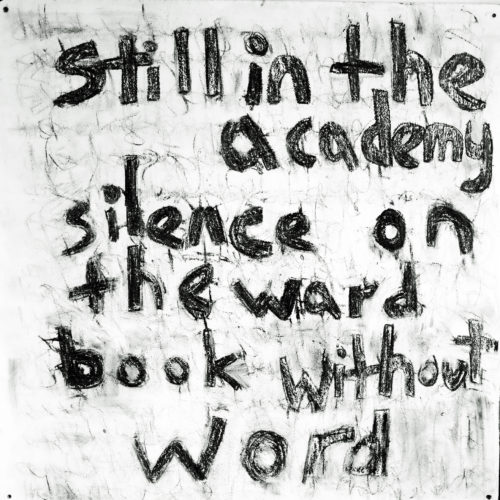 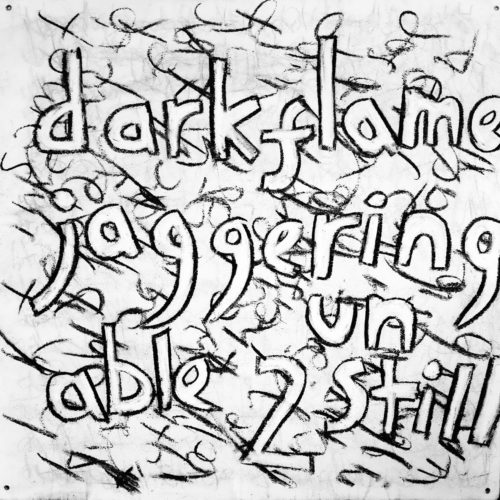 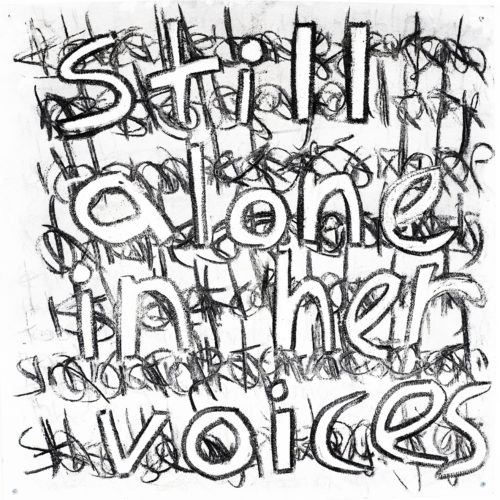 “An amazingly light touch with very serious and important topics, giving your audience space to experience your work and concerns in such an intimate way. I find your work relevant, poetic and so original. (…) We are dealing with the antithesis of all that is mass-produced, commercial; one needs time to engage and to listen to the work. It might even help us to listen to ourselves.  … a great, and singular artist, with no other justifications or conditions needed.”

“squarepegs in roundholes reduces psychiatry to firewood and is another part of our ongoing ‘reclaiming the languages of lunacy’. psychiatry still refuses to acknowledge how we’re all being driven over the edge by a maddening world.

and ‘oppositional defiance disorder’ is just asking questions or swearing – there’s a lot to swear at!  so here’s our subversion with a whitecoat repeatedly hammering the wrong shape into the wrong hole of a kiddies toy while victim-blaming before it all falls apart. our version of take the toys from the boys (originally by poison girls) is then sung while resist ants (thanks north-east mad studies collective) are handed out.

squarepegs in roundholes was premiered thanks to pug night, tyneside. have hammer, will travel, please book us! film by adam goodwin at https://www.dailymotion.com/video/x6srmhq” 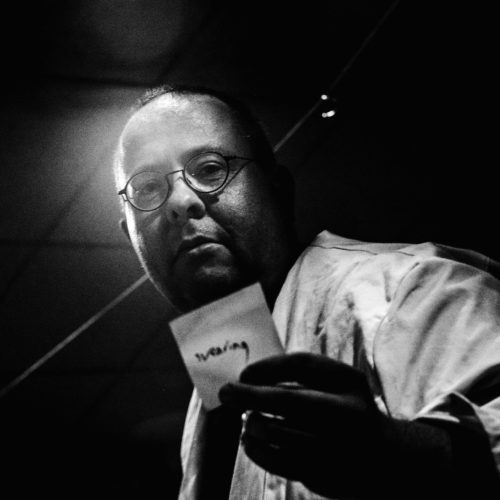 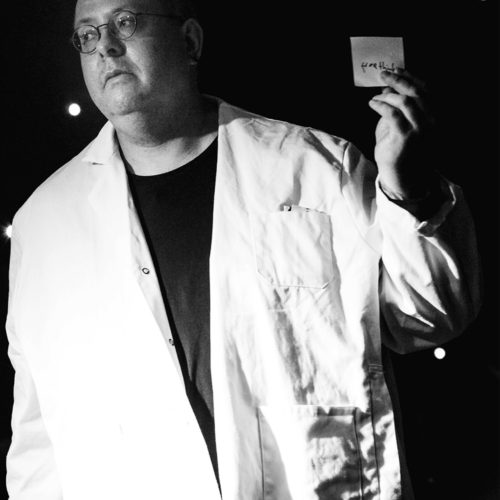 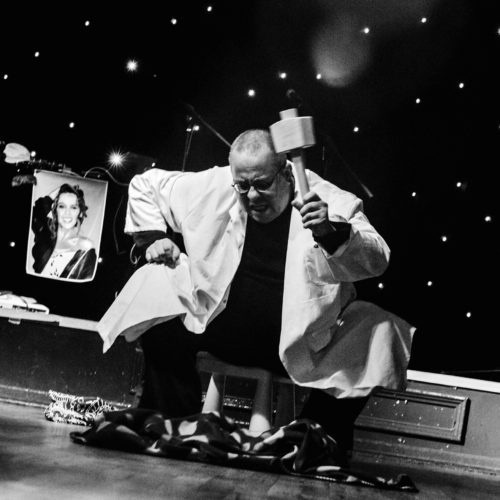 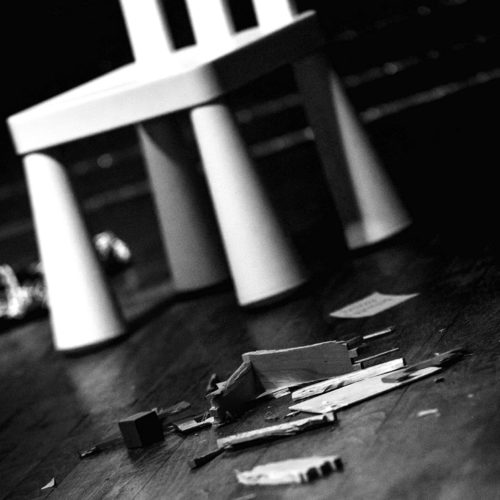 “In these dark times when inspiration, imagination and hope are rare commodities I can rely on gobscure to come up with these three essentials and to do this with the other essential – humour.  I have known their work since 2005 – films, spoken word, live art performances, visual art and theatre.”

“we’ve loved mary wollstonecraft since our first real breakdown as we became a teen. like us, mary was mad, bad, rad, bisexual and international, only she got written off as hyena in petticoats.

here is a photo of us performing for lada/ dash at mac birmingham as part of ‘awkward bastards’ celebrating how these days we’re all hyenas in petticoats. this walkabout performance has us sing an altered nursery rhyme, hand out a broadsheet celebrating some of her internationalisms before folks are invited to write/draw a line of a journey and something hopeful they wish to find on the journey on mary’s petticoat.” “this is a fragment from a huge project we’re looking for support to tour. the full project explores mary’s multiple identities including her suicide attempts, her radicalisms, her writings, her bisexuality and european-ness. sound art was commissioned for exhibition by curious festival 2018 – north-east england’s lgbtq arts festival. ultimately the project also contains 3d printed sculpture, a visual-poetry suite, film, an installation, which updates her protests to today, and a living library to inspire more creative protest.”