Following a conversation in Disability Arts Online’s Facebook Group Peter Street selected a few artists’ work that he wanted to write poetry in response to. Here he explains his writing process and shares poetry in response to the works of Rachel Gadsden, Elinor Rowlands, Jo Paul and Michelle Baharier.

It was back in 1987, when I first started writing poetry in response to visual art in a project with Leigh Art College and from there I set up an organisation called Chances creating writing workshops for disabled people. The curator at the art college – a guy called Martin Lucas – commissioned me to write a series of poems in response to the work of Tony Bevan. So I had about ten of my poems that went with Tony’s exhibition when it toured galleries in different cities in 2006. That project captured my imagination and I have toyed with the subject, using paintings as a prompt, on and off for many years.

I approach the writing by imagining that the pictures are talking to me and that we are having a conversation – as if the objects in the paintings are people. The objects around us are really important but we so often take them for granted, so it’s a way of highlighting the value of what’s in our environment.

The process of writing this series of poems has meant a lot to me. With each draft I became more relaxed with the conversations I was having with the images and more confident about what I was doing. I was looking for disabled artists whose work I could relate to. Being on the autism spectrum I found a sense of freedom in creating poetry in response to the work of other disabled artists.

Another thing about these poems ‘Conversations in Colour’ is that there is no punctuation – as you can see. I am relying on the importance of the white space. It’s an idea I’ve taken from the poetry of the 1950s American poet Robert Creeley. It came about after I gave an abstract talk at Liverpool University on poetry as the ideal artform for people on the autism spectrum, because of the opportunity it provides to subvert rules and regulations. I cited Robert Creeley, ee cummings and Ezra Pound but the important thing about Creeley is that some of his poems are written in a form of shorthand come text message with big spaces between words – his poem For My Mother, for example.

And that gave me the idea of using white space to make certain words stand out more importantly, rather than using commas, colons or exclamation marks or whatever. I also liked Creeley’s use of ampersands to make things stand out. They cut out the use of unnecessary connecting words, which make a poem more like a piece of prose.

When we put the call out in the Disability Arts Online FB group Rachel Gadsden’s was the first painting that came up. I got an idea immediately seeing the artists gift in being able to rub away at the outer layers of the image. She’s rubbing away at the beige to find the painting underneath. Most artists, I’d say 95 per cent, never find the painting underneath. It’s only gifted people that do. 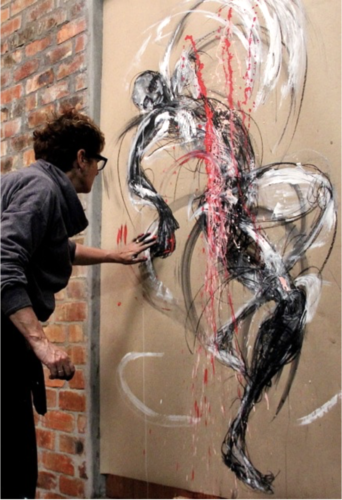 until red bricks
nudged up
giving me space

constantly   stand here
next to us   where
some one will see

& now this woman
rubbing away the beige
there i am    boasting

With Elinor Rowlands it was a different ballgame altogether. We’d had some contact through Facebook and email and when I realised she was on the spectrum, too I felt that we were on equal terms, if that makes sense.

I liked the bright colors in her artwork – truly wonderful. What she described as a ‘goldfish bowl’, I would have called the artwork ‘glass’, because it reminded me of my days as a semi-professional drinker. So it reminded me of a dream of going back to drinking again, which I haven’t done for 17 years, now. As soon as I saw that picture, I wrote the first draft within about half an hour. 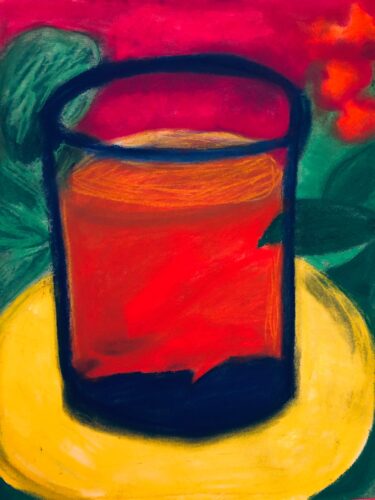 we last tasted each other
when you brought
sunshine

to that part of the bar

come on be reasonable

& you were sitting there
waiting
not saying anything

I love the distinctiveness of Elinor’s choice of color – and especially the bright orange lips in her painting Aurelie. The artwork immediately took me back to my first kiss – I even closed my eyes – at the Auld Lammas Fair in Ballycastle Northern Ireland. This would have been 57 years ago in 1963. 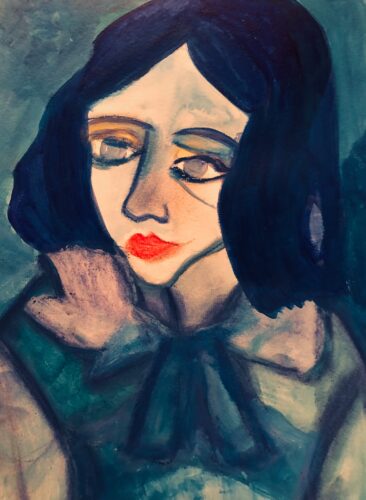 With Jo Paul’s image of a crumpled shirt, the conversation led me to a very disturbing memory from a time I was a war poet in the Balkan Wars. When we went to Lipik in Croatia I met some young boys who actually had seen their parents being executed. The poem came to me in about two minutes.  It just came out as though it had been waiting there in the background since 1993 when I was there. 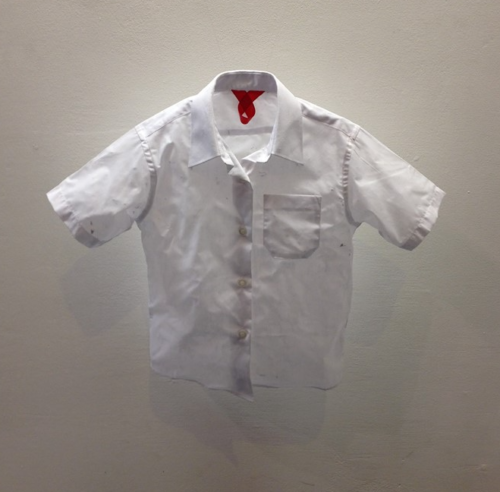 out of all recognition

its same shirt
now look   all
these years later

like that little boy
who’d witness his parents
being executed

that’s his shirt
i knew i’d seen it before

I’ve always had a fear of doors. It’s mostly a fear of what lays behind them. And in the case of Michelle Baharier’s corridor, the door is left open, which is one of my pet hates. So, the person in the corridor is going nuts, because the door has been left open. I imagined the person feeling free bathed in warm colours and then they realise that traumas that have been left stacked up for years, behind that door have suddenly been released, because the doors’ been left open. 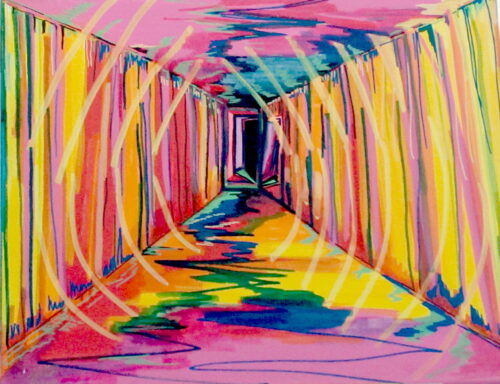 Yoo hoo can
someone please
close that door

take years to get rid

through all those
happy colours
now climbing around my toes

A truly successful project. The conversations between the artwork and the poems are so natural as an expression of the poet’s feelings but they are also universal feelings that we the readers might have felt and remember or at least can empathise with. The tender feelings of a first kiss to the feeling of dread that might lie behind that closed door.

Hi Peter! Nice to hear from you again. I really enjoyed the way you had the pictures talking to you – helped me focus on details and understand a bit more what might be going on in the canvas. Also LOVED the pictures! I liked your use of the white space and now I want to teach again (retired a year ago!). Lovely stuff!

These poems do a wonderful job of opening up these art works to interpretation. We all have different ideas when we look at art and, here, Peter gives us an insight into where his thoughts go, some of which I relate to very well. The poems also stand alone with their own strong imagery and stories. Each poem expresses some aspect of transformation, change or growth and surely this is also a reflection of what it is to be human and perhaps, more specifically, what it is to live and grow with a disability.