Sonia Allori’s second song in her series on the theme of being locked down and locked out is called ‘Human Nature’. She evokes the act of looking and experiencing nature through her window out onto a very little garden in the Scottish Highlands. 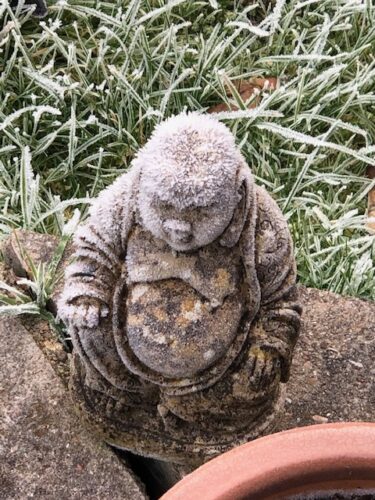 After almost 6 weeks of snow the garden has emerged again from under its thick white frosty blanket. I live in Aviemore in the Scottish Highlands which might seem like a peculiar place to live except that it’s actually a mainline station with direct trains to Glasgow/ Edinburgh and even London.

I miss trains and travelling about but while we have to stay put, I’m making the most of having windows and a postage stamp garden oh and living somewhere a bit gorgeous surrounded by the Cairngorms helps too.

It has been almost impossible to go out lately because NHS power wheelie and snow are not a happy combination.

I’ve been endlessly fascinated watching a gang of tough guy crows noising up the neighbourhood, fighting over who gets to sit on top of the lamppost. A prize to be squabbled over on a daily basis apparently. And my favourite, the robin hiding from the noisy crow crew hopping about and being cheering to the soul by its mere existence.

The song, ‘Human Nature’ describes the view from my office window where I sit working (and worrying!) on most days when body and brain are behaving. I get lost in the view actually and not because I’m a nosey neighbour (!) but because I’m a great observer of small changes unfolding and little everyday things.

I’m not sure if I have influences as far as song writing goes, tending to make it up as I go along and being carried by a whim, or a lyric or melodic fragment. This song is very uncluttered evoking birds, weather and folks wearing masks (it’s a small place though and sometimes 45 minutes goes by between folks passing by the window!).

I’m looking out the window again,
My little view upon the world.
The snow is melting, and green emerging,
Crows dive-bombing and robins hiding.

I’m looking out the window again,
At the mountains and the trees.
There are now tiny signs of Spring,
And thoughts of wine and cheese!

I’m looking out the window again,
And wondering what’s next for the world.
Life’s not easy, it’s often breezy,
But surely there’s some hope!

I love this haunting song and would love to share it with my actors.