Earlier this year the work of Ngozi Ugochukwu featured in the Manchester Open Exhibition 2020 – celebrating the creative talent of Greater Manchester residents. Here she shares a selections of photographs from an ongoing series. 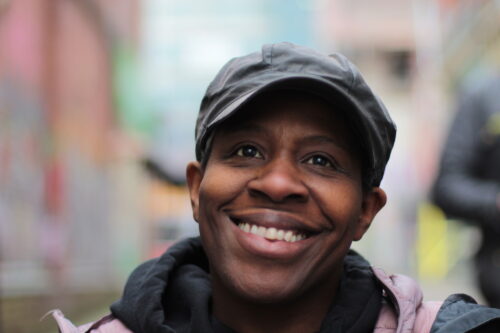 I love photography! I remember being so excited about having my first camera; I couldn’t believe I was getting one. At first I didn’t know what I was doing with it or what I wanted to take photographs of. All I knew was I wanted to capture things… anything.

My obsession with taking photos of stairs, started out of frustration of not being able to get into a lot of spaces, especially when I lived in London. It was my small piece of activism! But then I started to notice the architecture of the stairs, and this to me showcased the beauty within the photographs.

I can’t remember exactly when my fascination for staircases started. Maybe it was because I used to get carried up them on my dad’s back as a child. I remember looking back and seeing the endless space behind us.

Of all of the images in this collection, I only planned on taking two of the images (‘It’s Just Black and White’ and ‘Reflections by The Dock’) I kept seeing these places on my travels over and over again, and remember thinking ‘I need to capture these places.’

A lot of my work is serendipitous. The photos are of places I’ve visited both here in the UK and in Europe, mostly for the first time. If I was to go back to the same places, I am unlikely to see the same image again. There was always something that caught my eye or there was a certain atmosphere that drew me in to take each picture.

What I love about art is that one image can mean so many things to different people. When you see my photographs I want you to bring your own take to the image, regardless if you know me or not. How does it make you feel? What does it make you think about? How does it inspire you? Don’t think about what am I trying to say but more about how the image speaks to you. That is what I want you to take away from each image, and my collection as a whole.

What I love about taking photos of architecture is the fact they don’t move, and you can capture a variety of angles and shapes from them. Also photos of architecture allow you to see the changes of the area over time, and mark the history of the town or city. Sometimes you don’t notice a building until it’s no longer there. Whether something new has been built, or an empty space has been left behind.

Whatever project I decide to do next, ‘The Stairs Project’ will be ongoing in the background. It’s a life long passion that I will remain with me. I hope to exhibit more photographs in a gallery in the future, that showcase my unique point of view and that will further inspire the public to express their opinion about the images.

These stairs instantly reminded me of a structure out of Minecraft or Fortnite. They are so imposing against the grey sky. 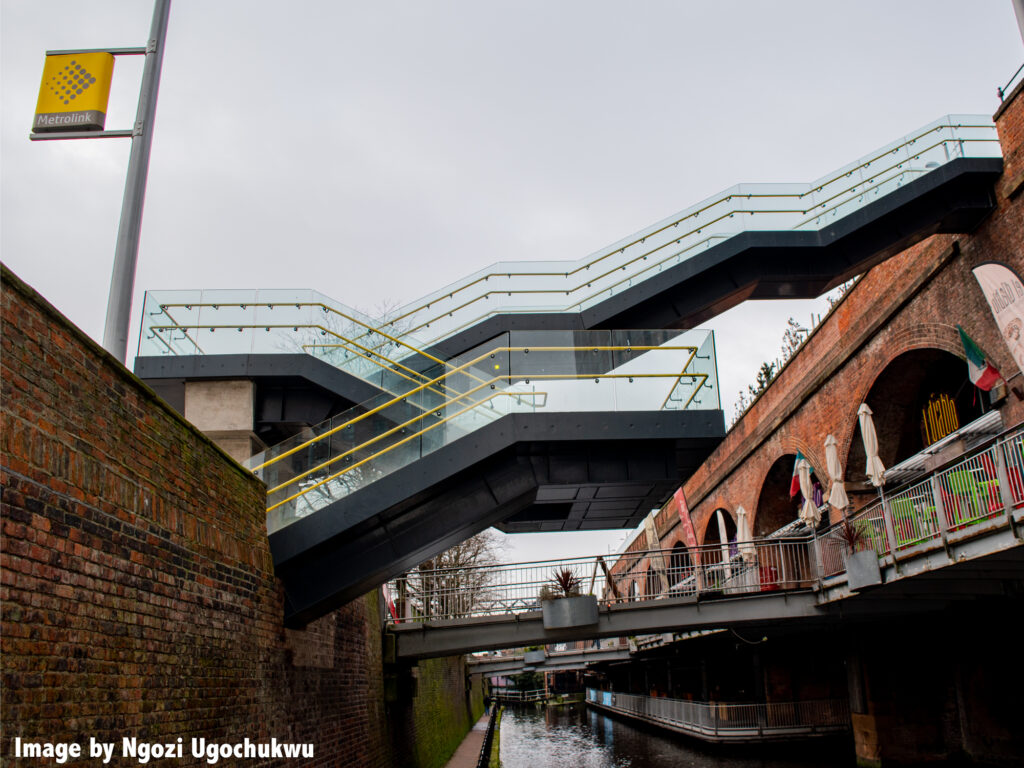 The Link. These stairs instantly reminded me of a structure out of Minecraft or Fortnite. They are so imposing against the grey sky.

I love the way it cascades down. The light caught my eye as I was leaving the building. 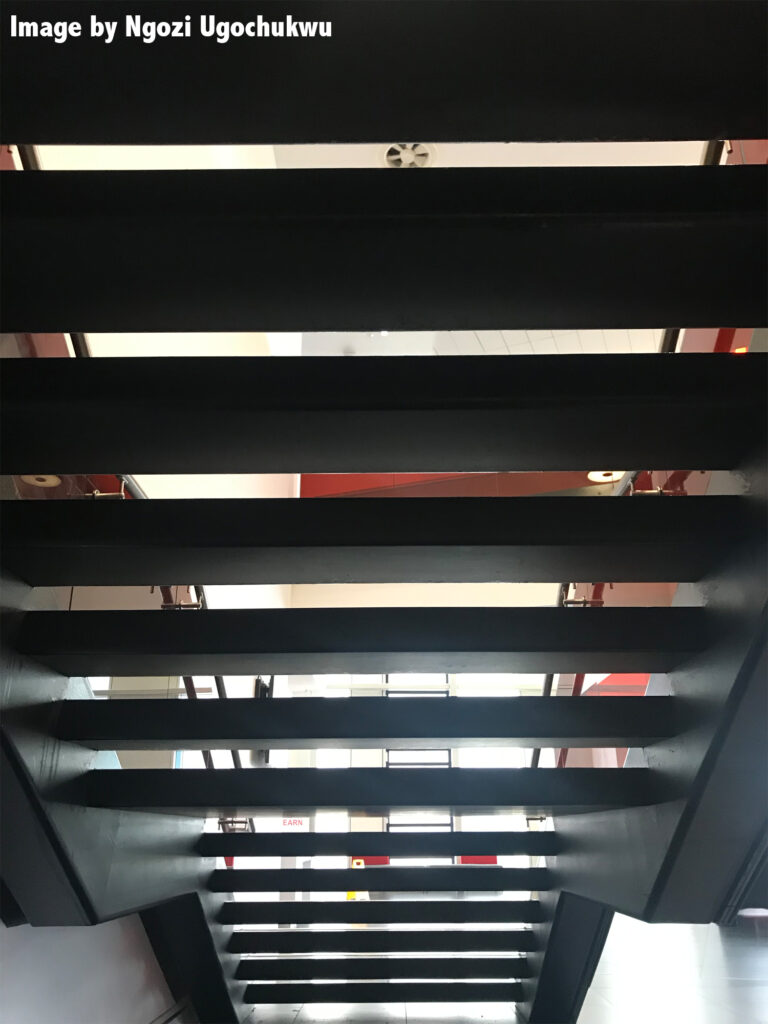 I take buses all the time and it only occurred to me to take this photo a few months ago. Where is he going to go? 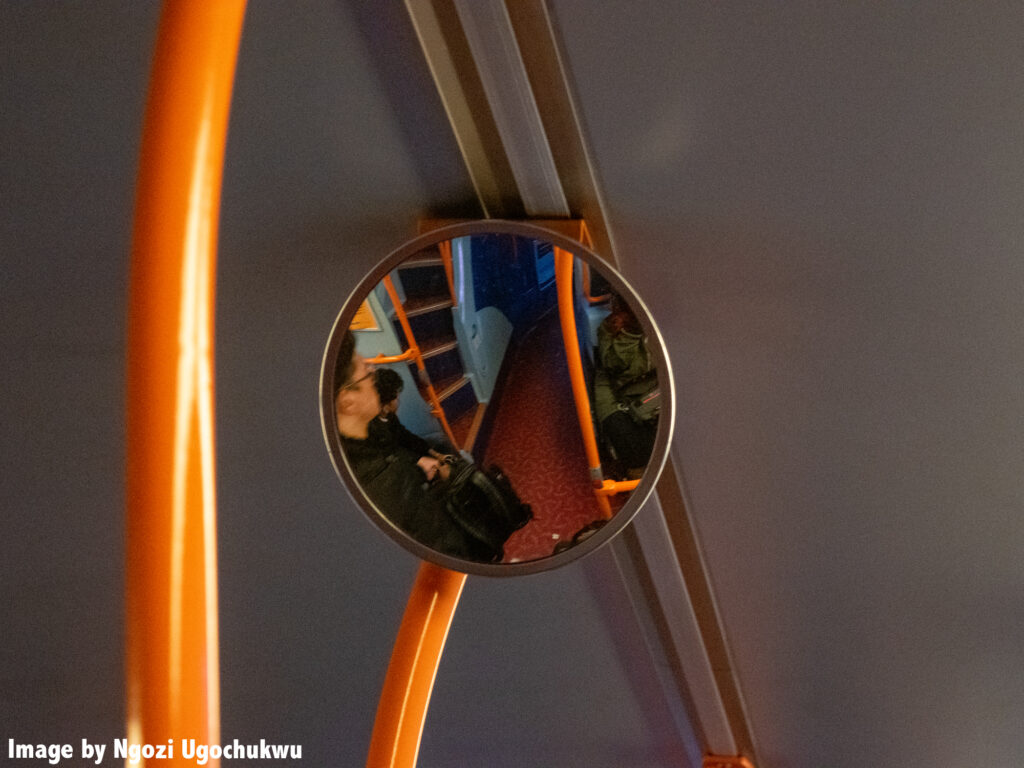 They look steep and scary, yet at the same time I want to know what is down there. 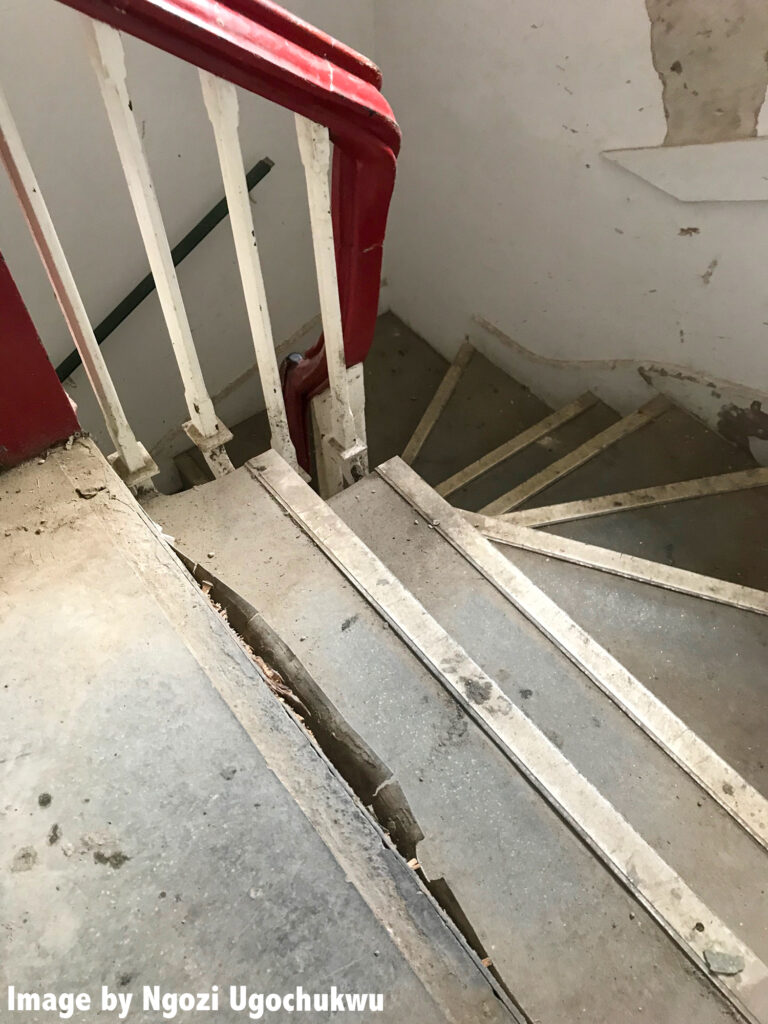 I don’t shoot in Black and White but here it looks like I did.  The staircase being behind bars gives quite a clear meaning from my perspective. I kept seeing these stairs every time I went up this long hill going to get a bus when I lived in London. By chance, I always stopped at them to catch my breath. 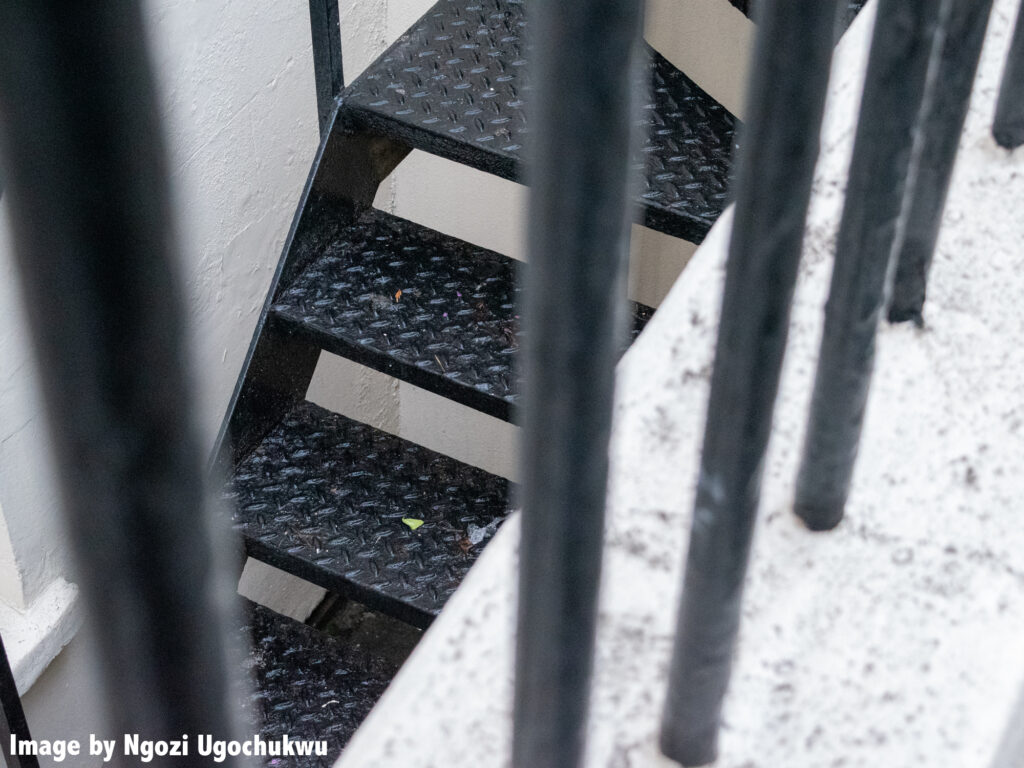 We don’t tend to look up too much, and when we do we find a hidden architectural world. I took this shot on my way to a meeting. You rarely see stairs from the outside of a building and the way the light hits the brick and the distinction of the shadows from the stairs is what attracted me to take the picture. 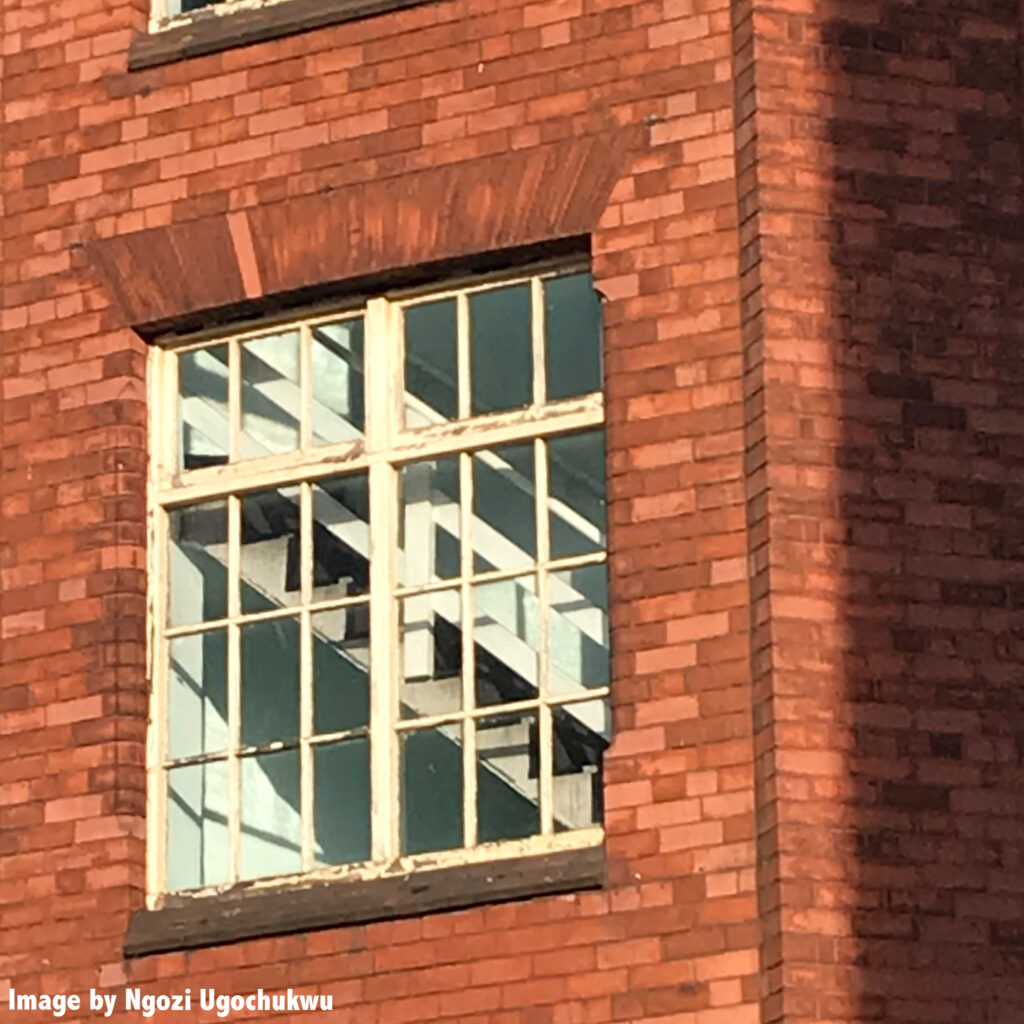 Outside Inside. Image © Ngozi Ugochukwu

This was taken near Waterloo station in London.  A woman was trying to talk to me about God and religion but I was distracted by the stairs in the background. 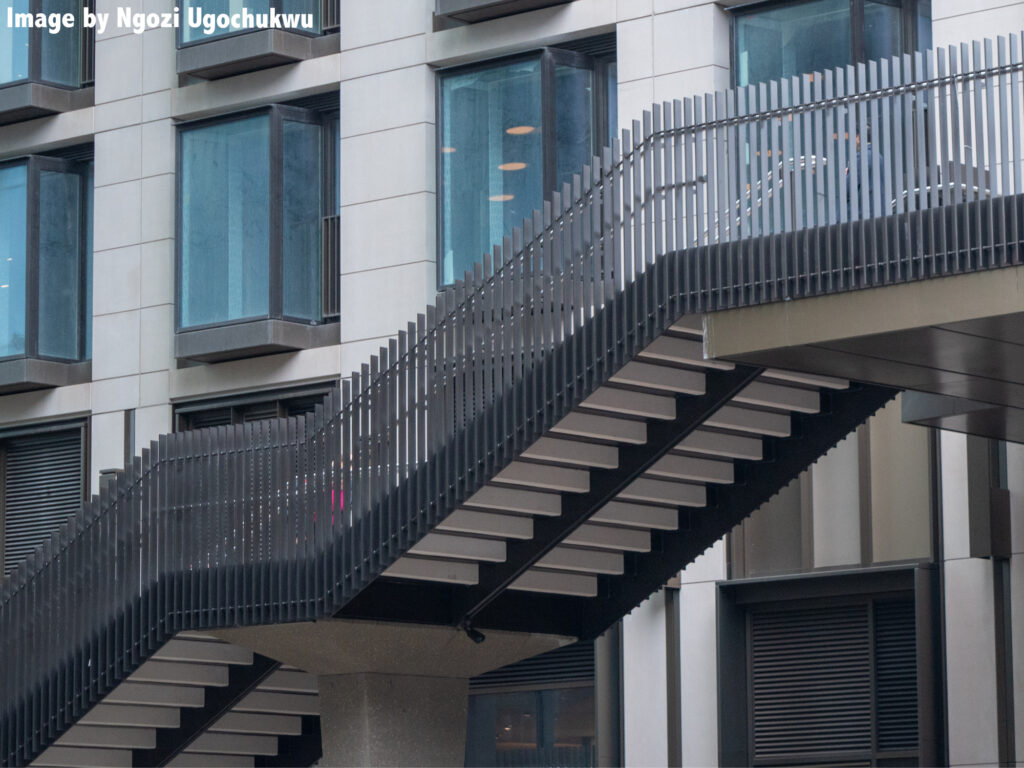 Under The Bridge Image © Ngozi Ugochukwu

I don’t really do pretty, but this is one of my prettiest photos on this theme. The image was taken when I was in Europe a few years ago, I think Amsterdam or it could have been Berlin. I didn’t expect to see something as charming as this in a big city. 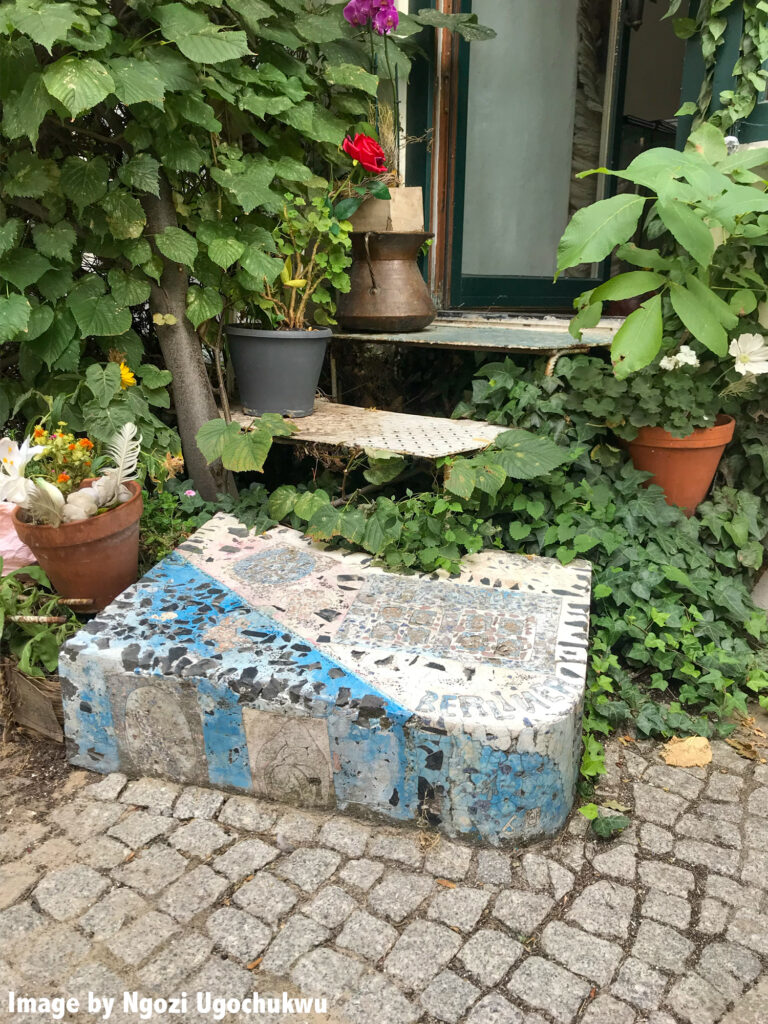 Many Steps Make a Journey

I was trying to make one step out of a lot of steps, compress a three dimensional object with depth, into a flat two-dimensional one. I didn’t quite get there, but I like the way it goes on and on. 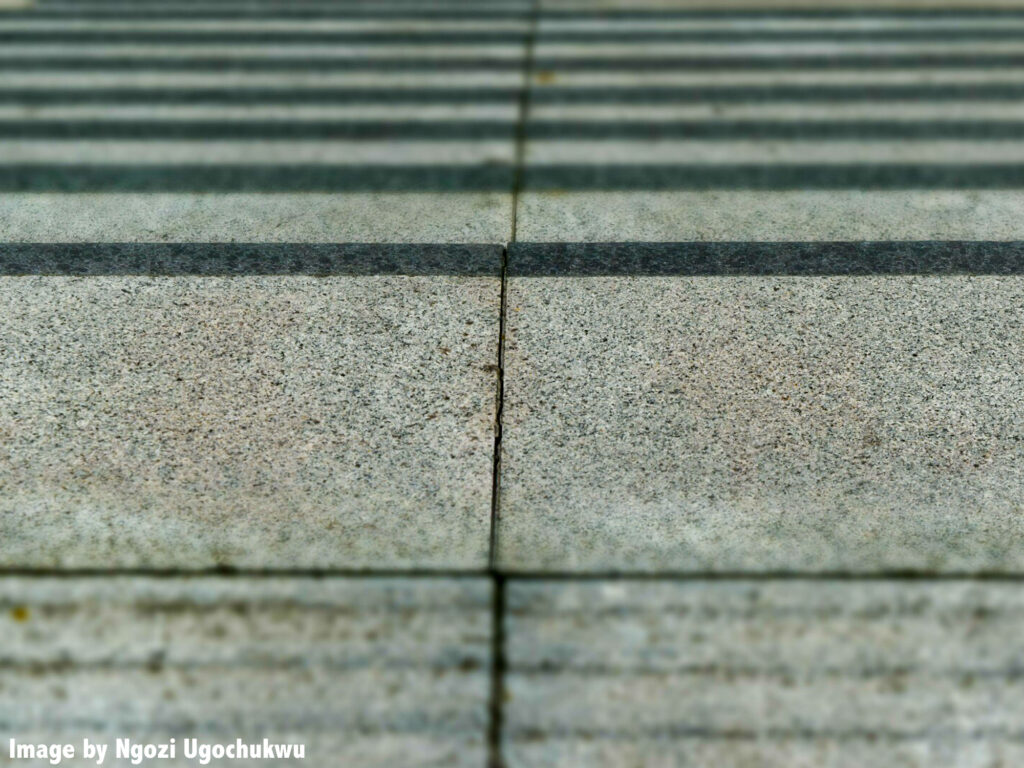 I’ve included this one, because I like the light shining through the window hitting the stripes on the carpet. As a friend said, it’s the perspective that makes this photo work. 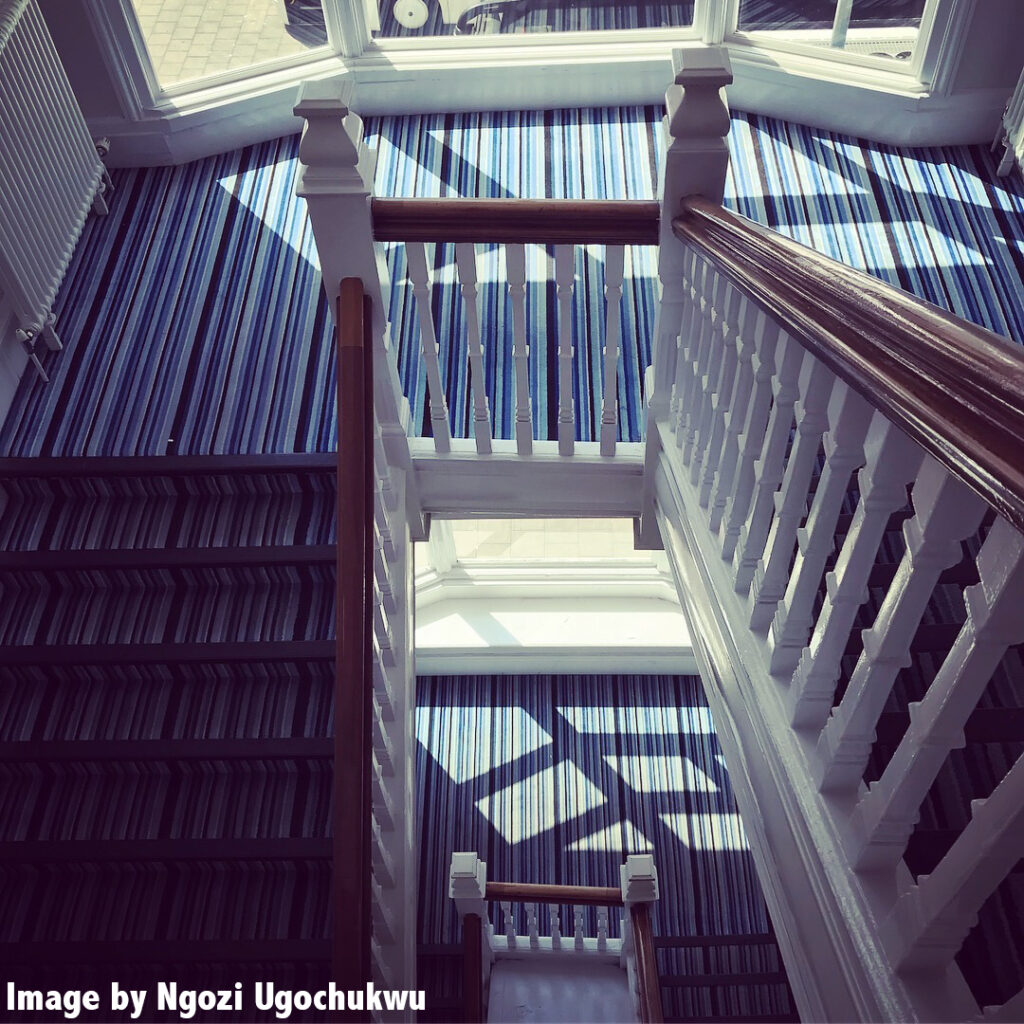 I find these architecturally imposing, nothing like the stairs you’d find in an average house. However, there is something about the wood against the black as well as the perspective that seems to lures you to enter an intriguing world. 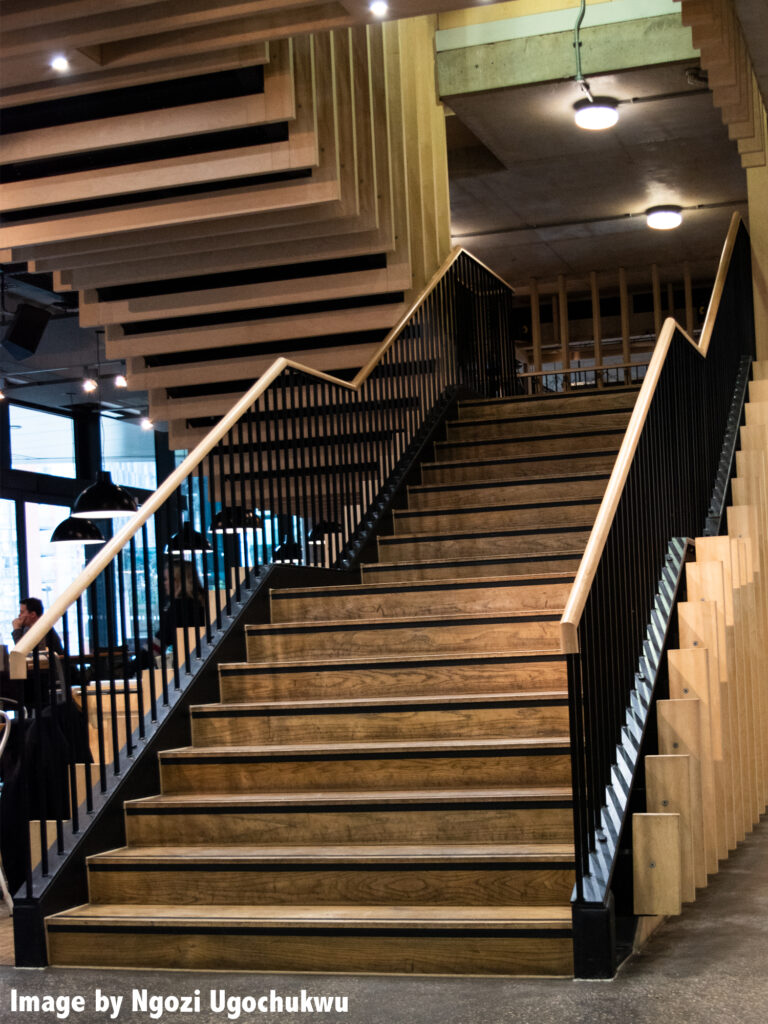 Peterloo Looking Down on Me

We are still not sitting at the same table. The irony of these steps is that they were meant to be inclusive and accessible for all (they commemorate the Peterloo massacre that happened on 16 August 1819 in St Peter’s Field, Manchester), but it never happened. However, the light hitting the railings gives me hope. 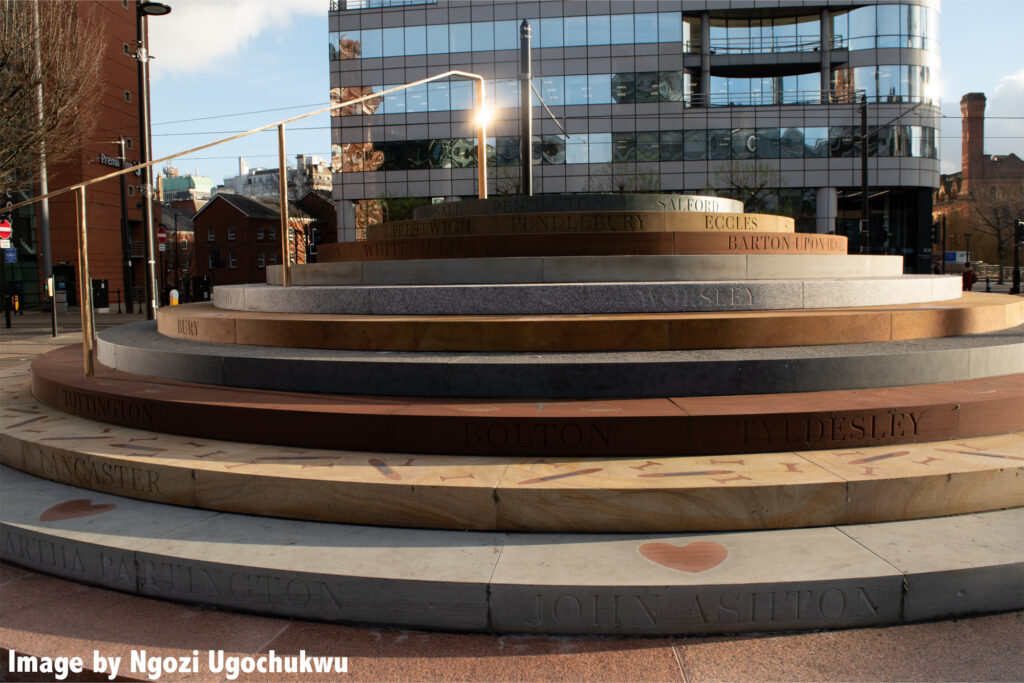 Peterloo Looking Down at Me. Image © Ngozi Ugochukwu

Reflections by The Dock

It’s strange that you pass by something every day and then one day you see it differently. I kept retaking this image as it was never quite right. The water was too choppy or the sky was too cloudy. I’m still not happy with it. 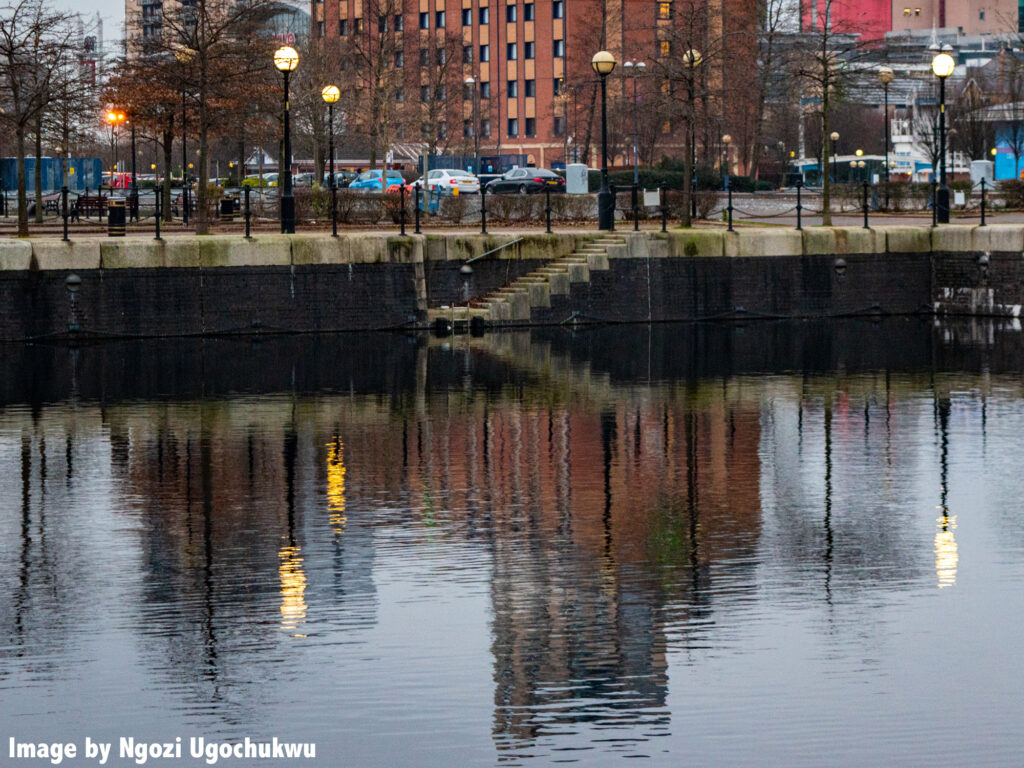 This is one of my favourite places to go out drinking in Manchester and they do have accessible toilets.

I like the colour contrast between the bright blue background against the yellow stairs and the fact you don’t know which way you should go – don’t you just hate it when it is not clear especially when you desperately need the bathroom? 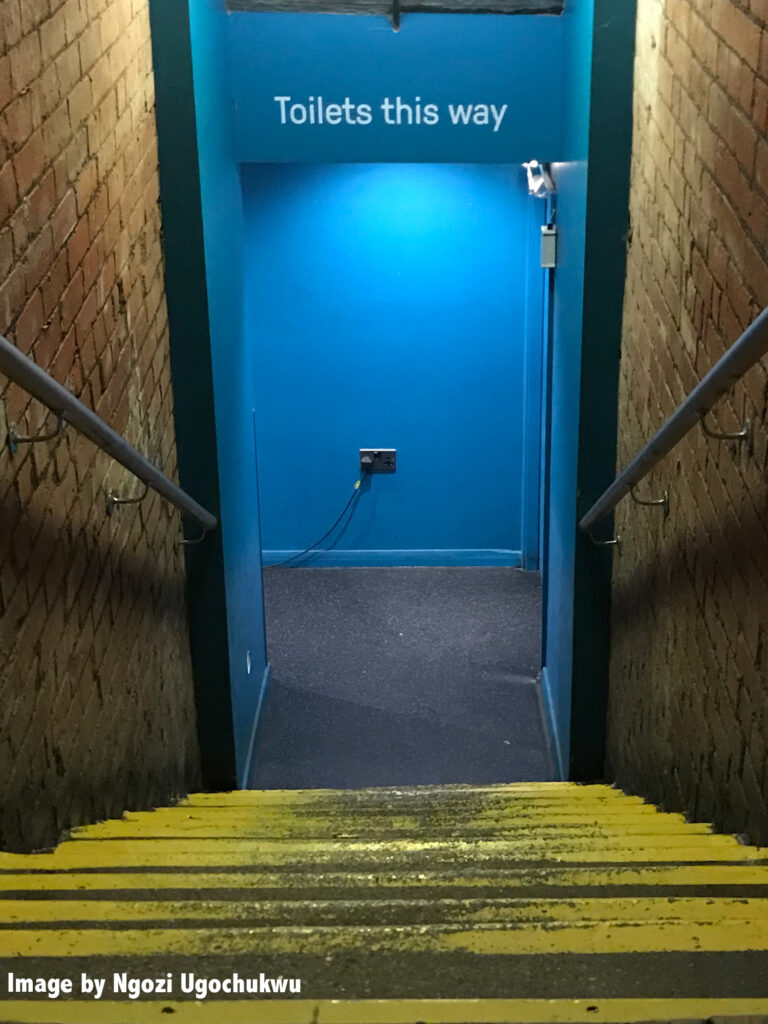 Wouldn’t it be great if a light did come on when you go up and down a set of stairs? Do you think ‘that one light’ was meant to be like the rest of them? 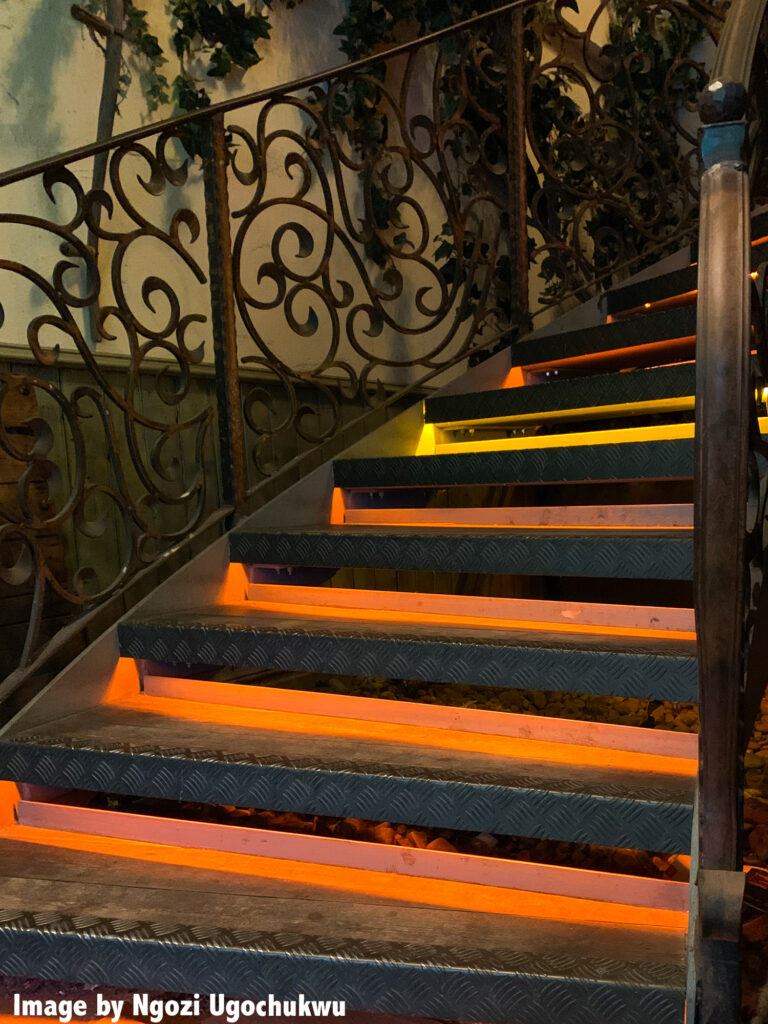 I am still trying to get that elusive shot of a staircase that looks like one step (as in Many Steps Make a Journey), but I like the way the light hits against the grey metal steps. 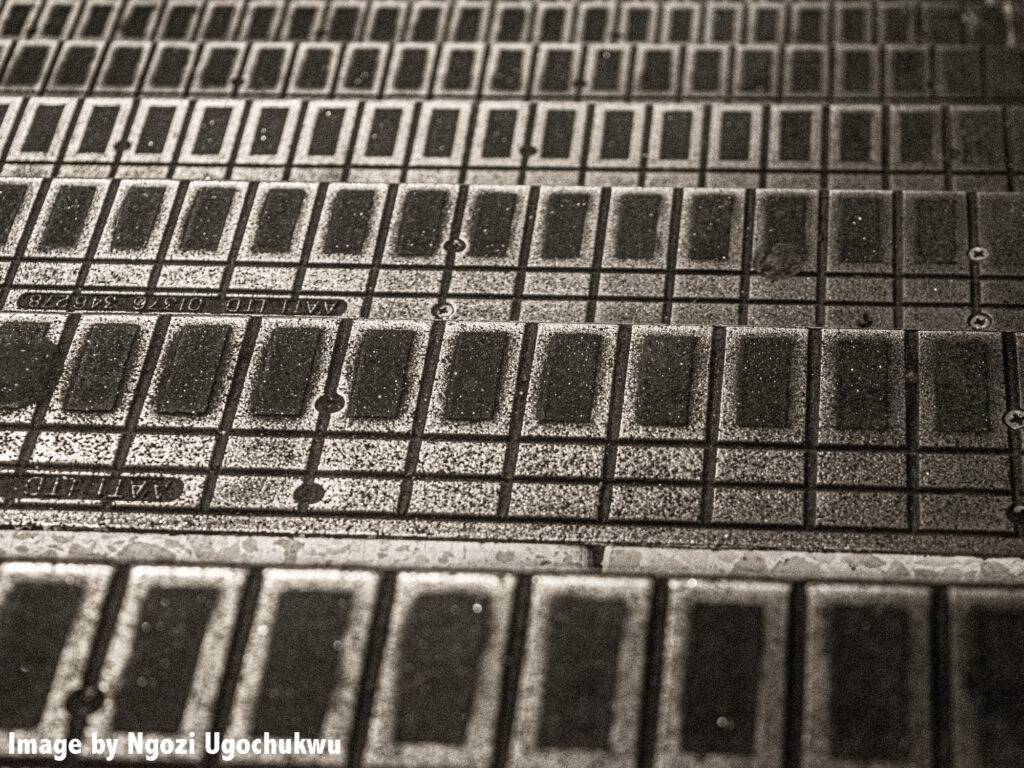 I was drawn to take the picture because of the way the natural light hits the colours and how the perspective makes the steps go smaller and smaller like a reverse ski slope. The two prominent big signs at the bottom add an extra layer of symbolism. 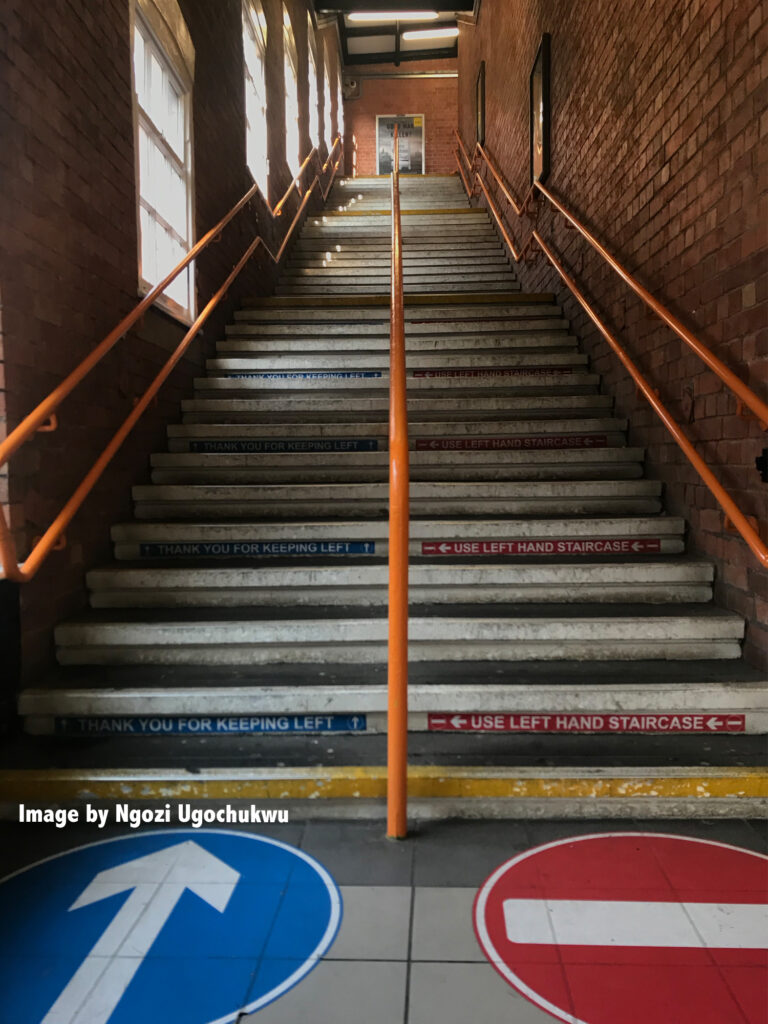 Fantastic ,well done . Who knew stairs were so interesting . This will make me look more closely when I’m out and about .

Love your thoughts next to each photo they really enhanced them for me. I love them all but One Step is an amazing architectural pattern and Brighton an intriguing mix of colour and shape. Thanks for this new perspective on something we all use everyday!

Amazing Goz, well done. Stairs are a barrier for me too, not as much as for some. I can use them with a handrail. They’re getting a lot harder to climb though. (I’d appreciate everyone ignoring the fact that that’s probably connected to age!!!!!). Stay safe Goz. Sending virtual hugs, kisses and love. XXXXX

Nice one Goz! Love your work, these are great photos!

I love the beauty of how you captured the stairs. You seem to have a good eye, I can’t wait to see more in the future.
Nice job, neat concept.

Great work Goz! So much to enjoy and lots to think about in your work. Stairs – so simple, so complex, so varied! Really awesome project x